Terry has been asking what we should name our farm that we recently acquired. From the beginning I’ve said we should go with Turtlehead Farm. I’ve had a very hard time swaying her toward that name. Think about it though, does it not bring a smile to your face? I finally convinced her the other day when we drove around our pond on the way to town. She said “Look at all the turtle heads!” and I replied, “See what I mean!”

We’ve recently had several turtles coming onto our property laying eggs. Our granddaughter and some friends got to see one doing so. We only stayed there for a minute though.

The other day Rex and I hiked out to the trailcam we have set up about a quarter mile to the North. We have it in some trees next to a pond. When I walked in, I heard something moving in the brush behind the camera. I watched and noticed it was a coyote pup. As I hurried to change the SD card another pup trotted toward us with a dead bird in it’s mouth. It looked at us like it was thinking: “What are you? Do you want to play?” Rex started to growl but was very well behaved when I told him to “Leave It!” It turned out we got over a hundred videos of coyote pups playing and wrestling.

With all the fun we were having with that trailcam, we decided to set up another one. We took our kayaks out on the pond to set one up there. After all, we have seen all sorts of visitors there lately!

While we enjoyed kayaking the pond,

I must say there is quite a learning curve on foreign models of trailcams. We finally decided it was too much trouble to set up where we had it. While I was retrieving said trailcam, Terry was on the road, excitedly watching her first weasel run up the fence toward the farm. She asked where I thought it would go. I told her it was probably going hunting for chickens. All of a sudden she didn’t like weasels anymore.

Between McDonald Reservoir and a couple birthday celebrations we’ve had a lot of fun with the kids lately.

For Codi’s birthday, he got to dress one of our pheasant hens that had been severely mobbed by the others. It took a few drinks, but all went well!

We’ve been on the lookout for grizzlies, but we haven’t seen any yet. I’ve seen a couple black bears on my mail route, but they’ve been fleeting glimpses. There was a cow carcass down the road a ways that we were hoping might bring one in.

Only birds there during the daylight hours that we’ve seen, but I’m pretty sure I saw a bear trail going down there from the timber.

Spring can’t seem to commit to Summer just yet. I’m okay with that though, I love the green and the flowers.

Well, I’d best go get my beauty sleep! It’s going to be ugly tomorrow at the Post Office! We have to deliver worthless phone books that nobody wants and makes our day much longer! I’ll be anxious to get back to Turtlehead. 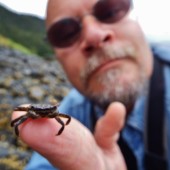 Does a Bear S**t in the Woods?